Don Garlits is a motor racing champion of more than 60 years.  From Pioneer of the sport, to elder statesman 'Big Daddy' of drag racing, he is idolised by millions of motorheads.  One such hero-worshiping motorhead is Warren Mills, who, in this book entitled: Don Garlits: The Enigmatic Hero, asks the question: Can a secular hero also be a hero of faith?

The question of mixing sports with religion is vexed with paradox, if not contradiction. Garlits will unlikely fit your pre-conceived ideas of religion or spirituality.  He is an enigmatic hero whose success is largely due to his Christian wife, Pat, whose encouragement and restrain enabled him to bridge that divides the profane and divine.

Garlits is not the only contradiction in this story.  There is another man who heroically merged the divide.  Christian faith is about this God-become-man, friend of outcasts, Lord of the Cosmos who gave himself to save us, who cannot save ourselves.

And because life itself is a paradox, this story is overlaid with yet another enigmatic voice.  We hear the timeless wisdom of King Solomon and The Teacher of Ecclesiastes who grappled with the same confusion of issues we face today.

With these three heroes in mind, the author tells Garlits' intriguing story, measuring the effect on his only life.  And why? because he and maybe you, and many others follow in the footsteps of unlikely heroes, inspired to combined faith with passion to become more human.

Born in Melbourne, Australia, in 1946, Warren Mills began his working life as a mechanic, and later a management trainer and consultant to the automotive industry.  He is a founding member of the Bunch of Blokes, a support network for men.  He is married to Elaine and has three children and 6 grandchildren. 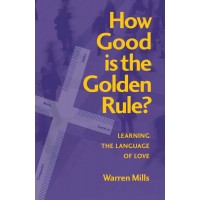 How Good is the Golden Rule?

'Are we there yet?' How many times have we heard this plaintive query - usually from the back seat o..